1. Only those who can trust, can find real happiness. But, trust makes them vulnerable to betrayal and heartbreak.

2. Cheating is a choice, not a mistake

3. Wanna Know If Your Man Is Cheating? Grab His Cell Phone and Run to the Bathroom – If He Kicks the Door Down, He Is Cheating 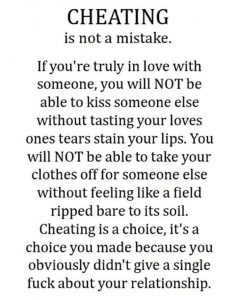 4. “She apologized for her behavior and he simply replied, ‘For being human?’ as he pulled her close and squeezed her in his arms.” – J.Iron Word

5. Never argue with someone who believes their own lies.

7. The truly scary thing about undiscovered lies is that they have a greater capacity to diminish us than exposed ones. 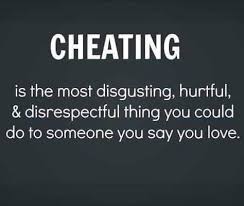 9. Those who cheat on their partners who are loyal to them; don’t deserve them. It is a trashy attitude to disrespect a person who is loyal in a relationship, by cheating on him or her.

11. It is helpful to think of people as having two fundamental motivations: the desire to see ourselves as honest, good people, and the desire to gain the benefits that come from cheating – on our taxes or on the football field. 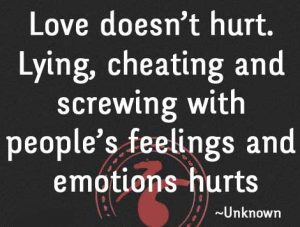 12. It is the nature of ambition to make men liars and cheats, to hide the truth in their breasts, and show, like jugglers, another thing in their mouths.

13. One must not cheat anybody, not even the world of one’s triumph.

15. Cheating is a sin, but honest cunning is simply prudence. It is a virtue. To be sure, it has a likeness to roguery, but that cannot be helped. He who has not learned to practice it is a fool.

16. Cheating= is easy. There’s no swank to infidelity. To borrow against the trust someone has placed in you costs nothing at first. You get away with it, you take a little more and a little more until there is no more to draw on. Oddly, your hands should be full with all that taking but when you open them there’s nothing there.

19. A liar deceives himself more than anyone, for he believes he can remain a person of good character when he cannot.

What Can Run But Cannot Walk?

Find The Number 2s Hidden Among The Zs

Pick A Day Of The Week & Uncover Your Weirdest Habits!

Find The Odd One Out In 30 Seconds!

What Mayan Symbol Are You According To your Birthday?

Can You Point Out The Odd One Within A Minute?

Where Is The Hidden 6?