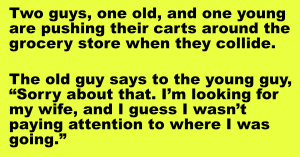 Two guys, one 80, and one 27 are pushing their carts around the grocery store when they collide.

The old guy says to the young guy, “Sorry about that. I’m looking for my wife”

The young guy says, “That’s OK, it’s a coincidence. I’m looking for my wife, too… I can’t find her and I’m getting a little desperate.”

The old guy says, “Well, maybe I can help you find her… what does she look like?”

The young guy says, “Well, she is 27 yrs. old, tall, with red hair, blue eyes, is buxom wearing no bra, long legs and is wearing short shorts. What does your wife look like?”

To which the old guy says, “Doesn’t matter, let’s look for yours.” 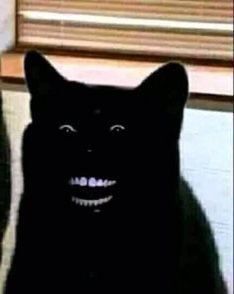 Two blondes were taking their first train trip to Warsaw 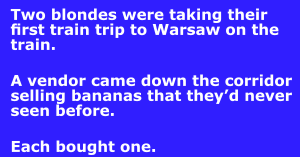 Two blondes were taking their first train trip to Warsaw on the train.

A vendor came down the corridor selling bananas that they’d never seen before.

The first one eagerly peeled the banana and bit into it just as the train went into a tunnel.

When the train emerged from the tunnel, she looked across to her friend and said, “I wouldn’t eat that if I were you.”

“I took one bite and went blind for half a minute.”

LoLLL, did you laugh? We hope you enjoy this joke, have a nice day!