Teach Me Life
Home Lifestyle There was an old man who lived by a forest.

There was an old man who lived by a forest.

As he grew older and older, he started losing his hair, until one day, on his deathbed, he was completely bald.

Before he pass away, he called his children to a meeting…

He said, “I used to have magnificent hair, but it’s completely gone now. My hair can’t be saved. But look outside at the forest. It’s such a lovely forest with so many trees, but sooner or later they’ll all be cut down and this forest will look as bald as my hair.”

“What I want you to do is that: every time a tree is cut down or dies, plant a new one in my memory. Tell your descendants to do the same. It shall be our family’s duty to keep this forest strong.”

And for centuries, the forest remained as lush and pretty as it once was, all because of one man and his re-seeding hairline. 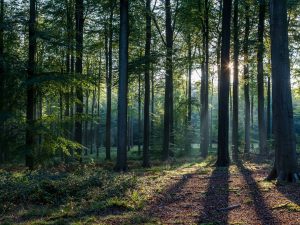 Expect a funny ending???
No…

This is not a joke, it is a good story to remind us that: Nature is very beautiful and we should preserve and protect it.

A Blonde is on a flight to Sydney 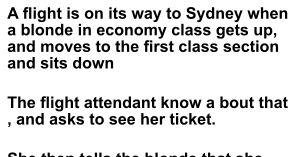 A Blonde is on a flight to Sydney

A flight is on its way to Sydney when a blonde in economy class gets up, and moves to the first class section and sits down

The flight attendant know a bout that , and asks to see her ticket.

She then tells the blonde that she paid for economy class, and that she will have to sit in the back.

The flight attendant goes into the cockpit and tells the pilot and the co-pilot that there is a blonde bimbo sitting in first class, that belongs in economy, and won’t move back to her seat.

The flight attendant tells them that they probably should have the police waiting when they land to arrest this blonde woman who won’t listen to reason.

The pilot says, “You say she is a blonde? I’ll handle this, I’m married to a blonde. I speak blonde”.

He goes to the blonde and whispers in her ear, and she says, “Oh, I’m sorry” and gets up and goes back to her seat in economy.

The flight attendant and co-pilot are so surprised and asked him what he said:

I told her, “First class isn’t going to Sydney “