Teach Me Life
Home Lifestyle One day a man goes to a pet shop to buy a... 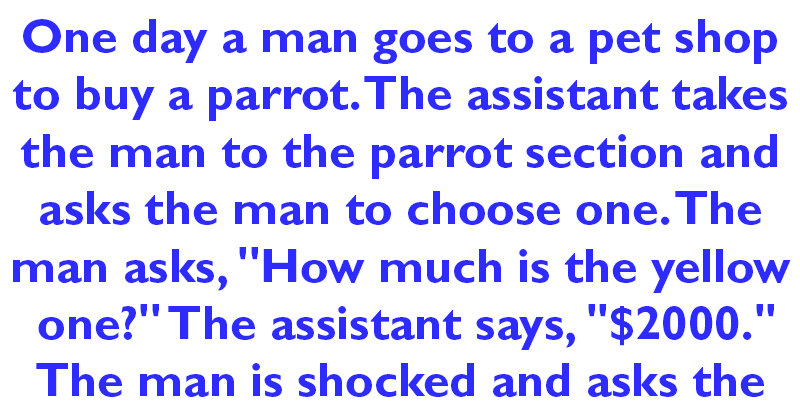 One day, a man goes to a pet store to buy a parrot.

The assistant takes the man to the parrot section and asks him to choose one.

The man asks, “How much does the yellow cost?”

The man is shocked and asks the assistant why it is so expensive.

The assistant explains, “This parrot is a very special one. He knows to typewrite and can type really fast.”

“What about the green one?” the man asks.

The assistant says, “He costs $5000 because he knows to typewrite and can answer incoming telephone calls and takes notes.”

“What about the red one?” the man asks.

The assistant says, “I don’t know, but the other two call him boss.”

A Man Buys a Centipede

A man goes to a pet store and tells the owner that he wants to buy a pet that can do anything.

The owner says, “How about a cat?”

The shop owner thinks for a minute and then says, “I’ve got it! A centipede!”

The man says, “A centipede? I can’t imagine a centipede doing everything, but okay… I’ll try a centipede.”

30 minutes later, he walks into the kitchen and … it’s immaculate!

All the dishes and silverware have been washed, dried, and put away the countertops cleaned the appliances sparkling the floor waxed.

He is absolutely amazed.

He says to the centipede, “Go clean the living room.”

The carpet has been vacuumed, the furniture cleaned and dusted the pillows on the sofa plumped, plants watered.

The man thinks to himself, “This is the most amazing thing I have ever seen. This really is a pet that can do everything!”

Then he says to the centipede, “Run down to the corner and get me a newspaper.”

The centipede walks out the door.

At this point, the man wonders what is going on.

The centipede should have been back in a few minutes.

He can’t imagine what could have happened.

So he goes to the front door, opens it…and there’s the centipede sitting right outside.

Did the centipede run away?

Did it get run over by a car?

Where is that centipede?

So he goes to the front door, opens it … and there the centipede is sitting right outside the door.

The man says, “Hey! I sent you down to the corner store 45 minutes ago to get me a newspaper. What is happening?!”