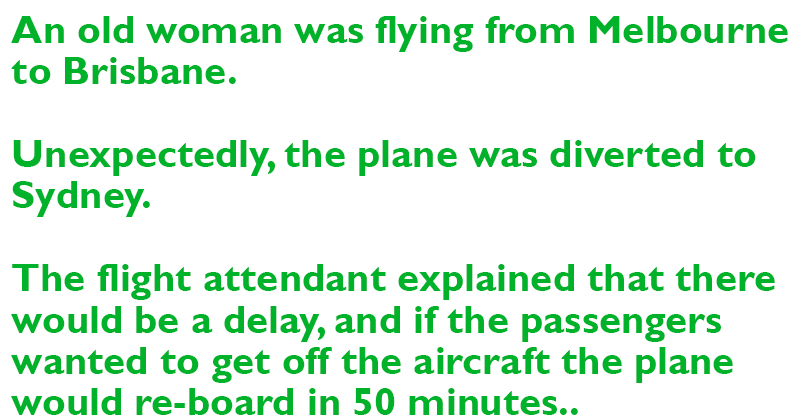 An old woman was flying from Melbourne to Brisbane.

Unexpectedly, the plane from Melbourne was diverted to Sydney.

The flight attendant said there would be a delay and if the passengers wanted to get off the aircraft, the plane would re-board in 50 minutes.

Everyone got off the plane except one old lady who was blind.

A man had noticed her as he passed and could tell the lady was blind because her Seeing Eye Dog lay quietly underneath the seats in front of her for the entire flight.

He could also tell she had flown this very flight before because the pilot approached her, and calling her by name, said, “Kathy, we’ve been in Sydney for almost an hour. Would you like to get off and stretch your legs?’

The old blind lady replied, “No thanks, but maybe Max would like to stretch his legs.”

Everyone in the gate area came to a complete standstill when they looked up to see the pilot getting off the plane with a Seeing Eye dog!

The pilot was even wearing sunglasses.

They not only tried to change planes, but they were trying to change airlines!

Moral Of The Story

THINGS AREN’T ALWAYS AS THEY APPEAR.

Old Woman Was Walking Her Dog 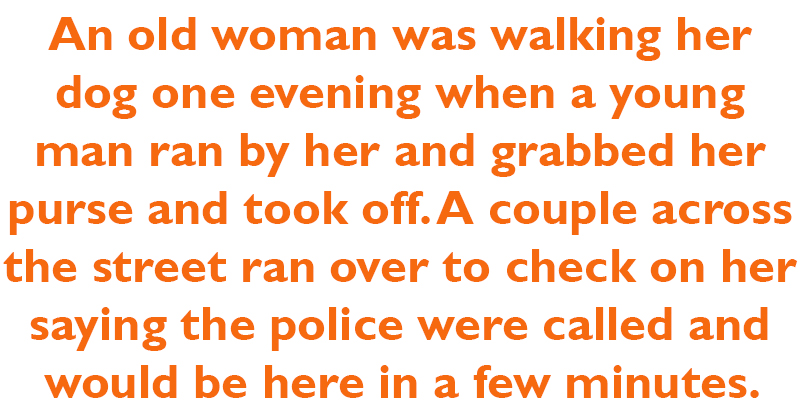 One evening, an old woman was walking her dog when a young man ran by her, grabbed her purse, and took off.

A couple across the street ran over to check on her saying the police were called and would be here in a few minutes.

The old woman smiles and tells the couple it’s really not a big deal. She carries her old purse to put her dog’s poop in it until she comes home to get rid of it.

Imagine the surprise when the thief opens the purse.