Teach Me Life
Home Lifestyle An old man visited a barbershop for a shave. 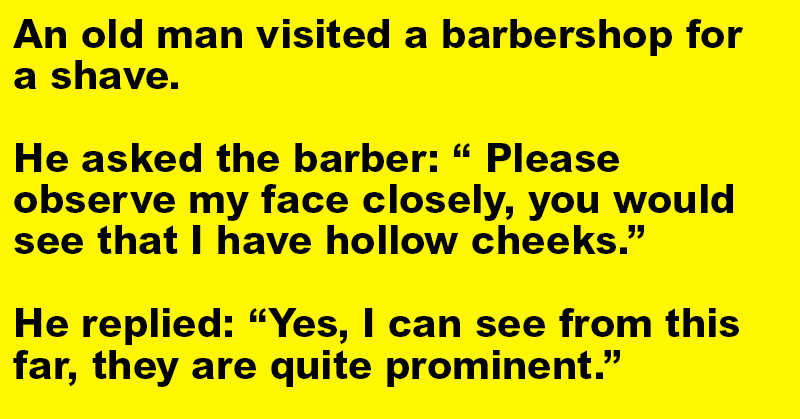 An old man visited a barbershop for a shave.

He asked the barber: “Please observe my face closely, you would see that I have hollow cheeks.”

He replied: “Yes, I can see from this far, they are quite prominent.”

The old man: No matter how hard I try, I never get a close shave. The bristle in my hollow cheeks always gave me a feeling that it was an incomplete shave.”

Barber replied: “Don’t worry, sir, I’ll give you the cleanest shave you’ve ever had.”

The old man sat down in a chair.

The barber after lathering his face gave him a small wooden ball and told him to put it in his mouth.

When Barber was shaving his right side of the face, he told him to move the ball towards his right cheek.

He continued shaving, after some time he said now moved the ball towards his left cheek.

The whole process continued till the time shaving was done. Barber moved his hand all over the face of the old man, he seemed quite happy and satisfied, and told him, he could take out the ball from his mouth.

The old man, to check his shave, passed his hand over his face and expressed his satisfaction.

He returned the wooden ball to the barber and gave him a generous tip.

As the old man was leaving, he casually inquired: “I am just curious to know, if anyone swallows the ball by accident then what would you do”?

He answered with a subtle smile: “Sir not to worry, such things do happen quite often, but they return the ball the next day. The ball that you have used today, was returned to me last evening”.

A young boy walks into a barbershop 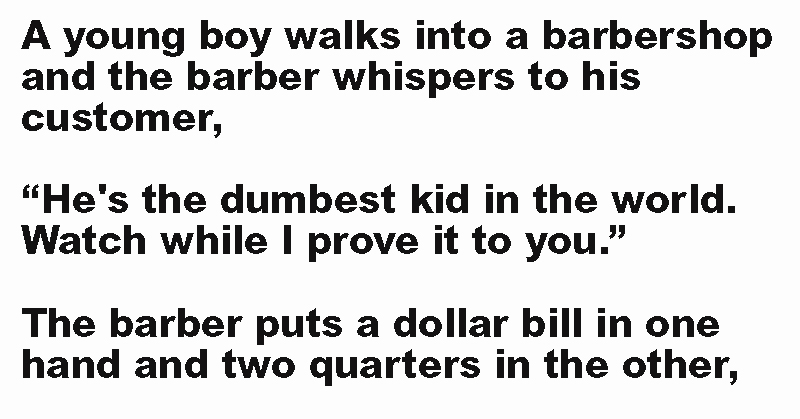 A young boy walks into a barbershop and the barber whispers to his customer, “He’s the dumbest kid in the world. Watch while I prove it to you.”

The barber puts a dollar bill in one hand and two quarters in the other, calls the boy over, and asks him, “Which do you want, son?” The boy takes the quarters and leaves.

“What did I tell you?” said the barber. “That kid never learns!”

Later, when the customer leaves, he sees the young boy coming out of the ice cream parlor.

“Hey, son! Can I ask you something? Why did you take the quarters instead of the dollar bill? ”

“Because the day I take the dollar, the game is over!”