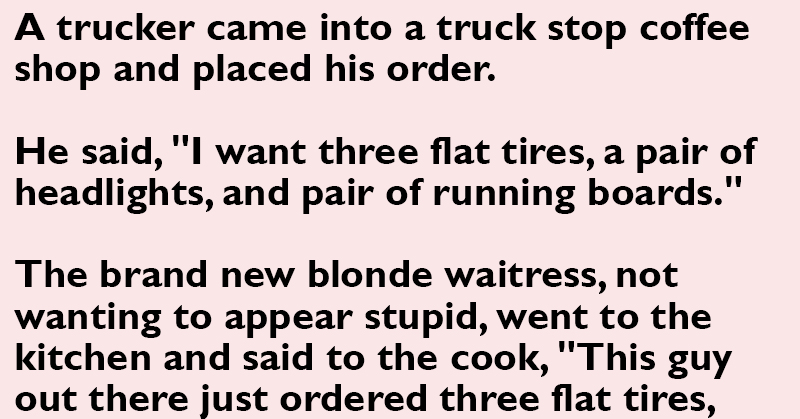 A trucker came into a truck stop coffee shop and placed his order.

He said, “I want three flat tires, a pair of headlights, and a pair of running boards.”

The brand new blonde waitress, who didn’t want to appear stupid, walked into the kitchen and said to the cook, “This guy out there just ordered three flat tires, a pair of headlights, and a pair of running boards. What does he think this place is, an auto parts store?”

“No,” the cook said. “Three flat tires mean three pancakes, a pair of headlights is two eggs sunny side up, and running boards are 2 slices of crisp bacon.”

She thought about it for a moment, then spooned up a bowl of beans and gave it to the customer.

The trucker asked, “What are the beans for, Blondie?”

She replied, “I thought while you were waiting for the flat tires, headlights, and running boards, you might as well gas up!”

A blonde was visiting Washington, DC for the first time 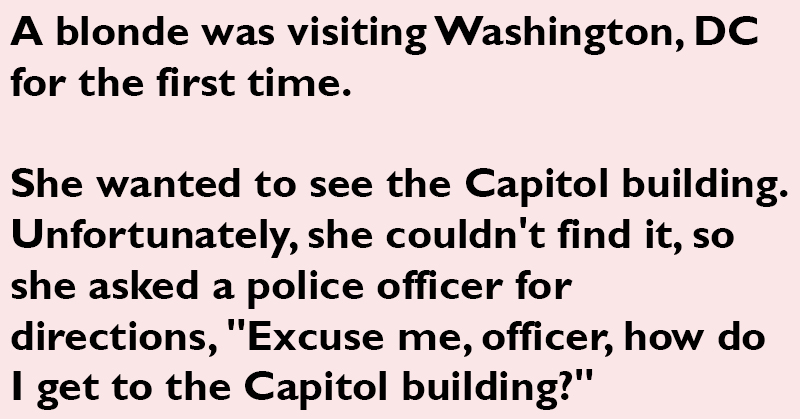 A blonde was visiting Washington, DC for the first time.

She wanted to see the Capitol building.

Unfortunately, she couldn’t find it, so she asked a policeman for directions, “Excuse me, officer, how can I get to the Capitol building?”

The officer replied, “Wait here at this bus stop for the number 54 bus. It will take you right there.”

She thanked the officer and he drives off.

Three hours later, the policeman returned to the same area and, sure enough, the blonde is still waiting at the same bus stop.

The officer got out of his car and said, “Excuse me, but to get to the Capitol building, I said to wait here for the number 54 bus. That was three hours ago. Why are you still waiting?”