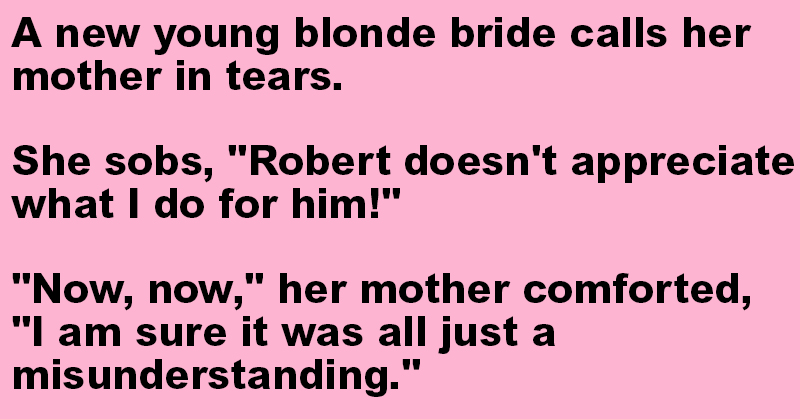 A new young blonde bride calls her mother in tears.

She sobs, “Robert doesn’t appreciate what I’m doing for him!”

“Now, now,” her mother comforted, “I’m sure it was all just a misunderstanding.”

“No, mother,” the young woman laments. “I bought a frozen turkey loaf and he yelled at me about the price.”

“Well, that is being miserly,” the mother agreed, “Those turkey rolls are only a few dollars.”

“No, mother it wasn’t the price of the turkey roll, it was the airplane ticket.”

“Well mother, when I went to fix it, I looked at the directions on the back and it said, ‘PREPARE FROM A FROZEN STATE,’ so I flew to Alaska.” 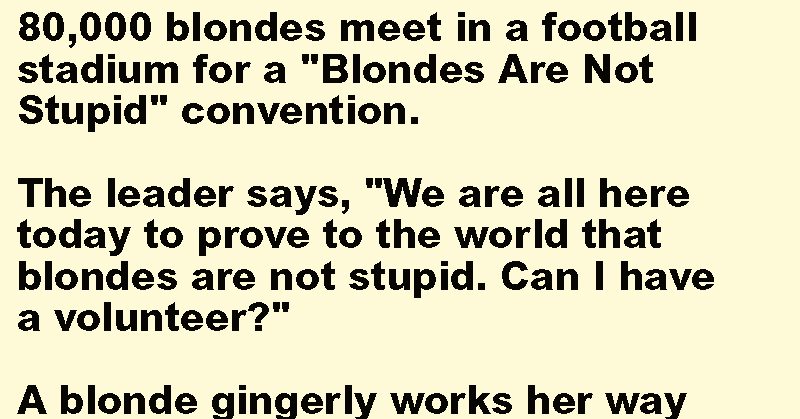 80,000 blondes gather in a football stadium for a “Blondes Are Not Stupid” Convention.

The leader says, “We are all here today to prove to the world that blondes are not stupid. Can I have a volunteer?”

A blonde pushes her way through the crowd and takes the stage.

The leader says, “Now that we have made the effort to bring together 80,000 of you in one place, and we have the worldwide press and global broadcast media here, uh, I guess we can give her another chance.”

The leader, unsure of whether or not he is doing more harm than good, eventually says, “OK! OK! Just one more chance – what is 2 plus 2?”

The girl closes her eyes and after a whole minute finally says, “Four?”

Throughout the stadium, pandemonium breaks out as all 80,000 girls jump to their feet, wave their arms, stomp their feet, and scream…