Teach Me Life
Home Lifestyle A Man Hires a Blonde

A man hires a blonde to paint stripes down a road, but she has to keep the contract and do at least four miles each day.

The blonde does 8 miles on the first day.

The boss is very impressed.

On the second day, the blonde does 4 miles.

The boss is a little impressed, but not as much as before.

On the third day, she does two miles.

The boss thinks she’s just having a bad day, so he still lets her keep the job.

On the fourth day, she only does 1 mile. The boss asks, “You were doing so well before. Why aren’t you doing well now?!”

The blonde responds, “I can’t get far because each day I’m getting further and further away from the bucket.”

A blonde, brunette, and a black haired girl are running. 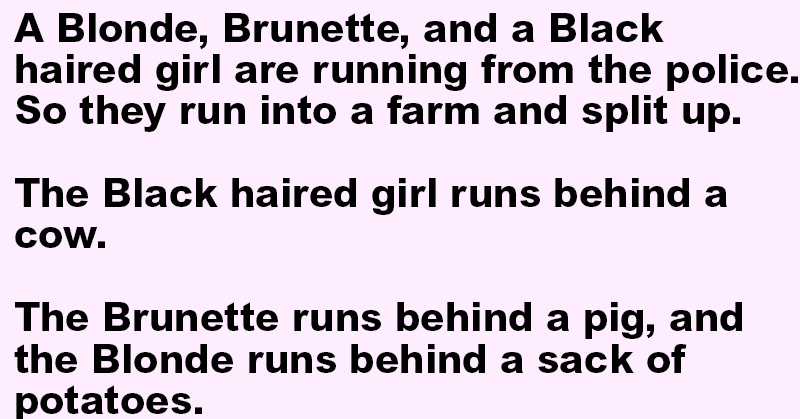 A blonde, a brunette, and a black-haired girl are running from the police.

So they run into a farm and split up.

The black-haired girl runs behind a cow.

Night comes and the police eventually find the barn and search it.

One of the policemen looks through the cattle and shines a light at the cows.

The policeman thinks nothing of it and moves to the pigs.

Thinking fast, the brunette tries to mimic the pigs and yells “Oink” “Oink.”

Once again, the policeman thinks nothing of it and moves on until he stumbles upon the sacks of potatoes.

The Blonde in the best voice she can come up with yells, “POTATOES POTATOES.”

Two tomatoes were walking down the street.

A man was extremely quick at math

Can You Spot The Odd Burger Out?

There was an old man who lived by a forest.

L.Johnny’s mom driving her car on the highway

Two tomatoes were walking down the street.

A man was extremely quick at math

Can You Spot The Odd Burger Out?