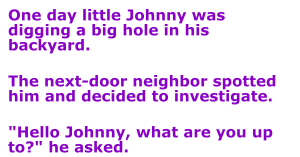 One day little Johnny was digging a big hole in his backyard.

The next-door neighbor spotted him and decided to investigate.

“Hello Johnny, what are you up to?” he asked.

“My goldfish died and I’m gonna bury him,”  Johnny replied.

“That’s a really big hole for a goldfish, isn’t it?” asked the neighbor.

“That’s because he’s inside your cat!”

Little Johnny gets a loan 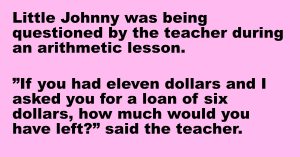 Little Johnny was being questioned by the teacher during an arithmetic lesson.

”If you had eleven dollars and I asked you for a loan of six dollars, how much would you have left?” said the teacher.

”Why eleven?” the teacher said.

”You may ask for a loan of six dollars, but that doesn’t mean you’ll get it!” replied Little Johnny. 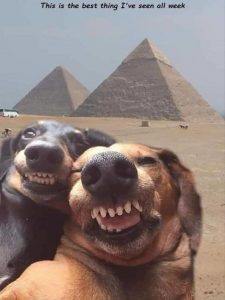