Teach Me Life
Home Lifestyle A Genius and an Idiot 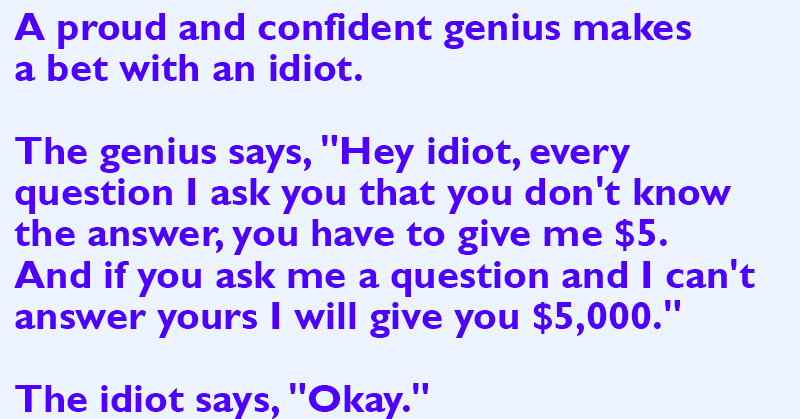 A proud and confident genius makes a bet with an idiot.

The genius then asks, “How many continents are there in the world?” The idiot doesn’t know and hands over the $5.

The idiot says, “Now I ask: which animal stands with two legs but sleeps with three?”

The genius tries and searches very hard for the answer but gives up and hands over the $5,000.

The genius says, “Damn, I lost. By the way, what was the answer to your question?”

The idiot hands over $5.

A blonde and a lawyer are sitting on a plane 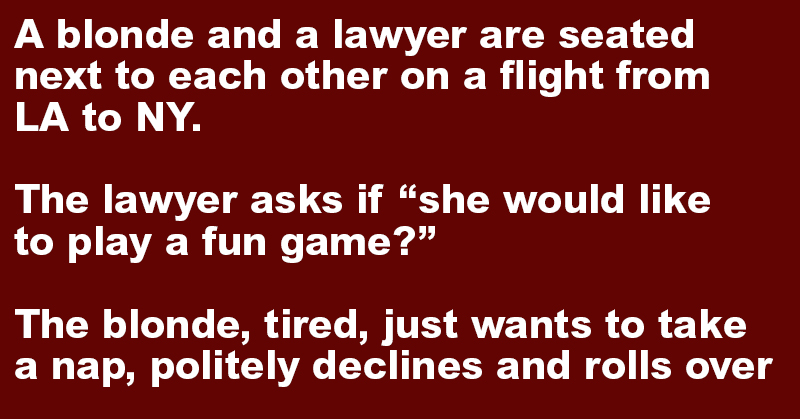 A blonde and a lawyer were seating next to each other on a flight.

The lawyer asks if she would like to play a fun game?

The tired blonde just wants to take a nap, so she politely says no and turns to the window to catch a few winks.

The lawyer insists and explains that the game is easy and very fun.

He explains, “I’m going to ask you a question. If you don’t know the answer, pay me $5 and vice versa.”

Again, she declines and tries to get some sleep.

This catches the blonde’s attention and, figuring there will be no end to this torment unless she plays, agrees to the game.

The lawyer asks the first question, “What’s the distance from the earth to the moon?”

The blonde doesn’t say a word, reaches into her purse, pulls out a $5 bill, and hands it to the lawyer.

She asks the lawyer, “What goes up a hill with three legs and comes down with four legs?”

The stunned lawyer takes his laptop and searches all of his references, no answer.

He taps into the air phone with his modem and searches the net and the library of congress, no answer.

Frustrated, he sends emails to all his friends and co-workers but, also, no answer.

After an hour, he wakes the blonde and hands her $500.

The blonde says, “Thank you,” and turns back to get some more sleep.

He annoyed, wakes her up and asks, “Well, what is the answer?”

Without a word, she takes her purse, hands him $5, and goes back to sleep.

And you thought blondes were dumb! Well done! Hahaha!

Hope this funny story will make you smile! Have a nice day!!

Can You Find All The Hidden Items?

A guy walks into a restaurant with a full-grown ostrich.

A Pencil is Hidden in This Picture. Find it.

Find the only piece of popcorn without a smiling face

An Old Lady With A Bag Full Of Cash Was Questioned...