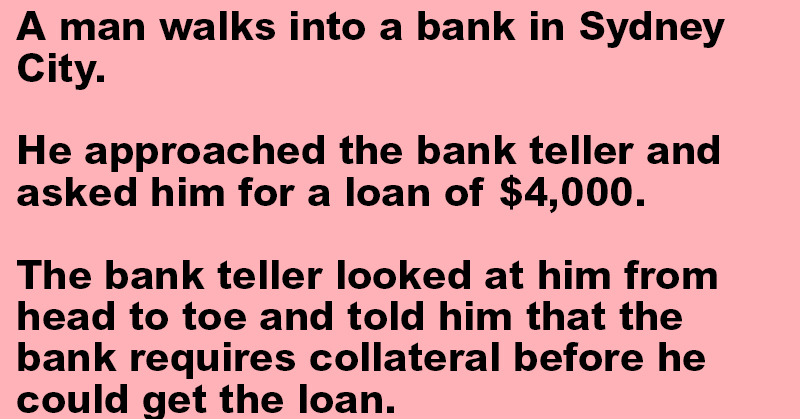 A man walks into a bank in Sydney City.

He approached the bank teller and asked him for a loan of $4,000.

The bank teller looked at him from head to toe and told him that the bank requires collateral before he could get the loan.

The man didn’t argue. He simply nodded his head and told the teller, “no problem.”

He went out and returned shortly to hand over the keys to a car to the bank teller.

With a calm expression on his face, he said to the teller, “Here are the keys to my car. You will see it outside. It’s a black Porsche parked in the back of the parking lot. ”

The bank teller was shocked but received the key in silence before handing over the $4,000 to the man.

A few weeks later, the man returned to the bank to pay off his loan and collect his car.

His interest was $11, and while he was paying it off alongside the $4,000 to the bank teller, the manager approached him and asked him for an audience in his office.

The man followed him and in the office, the manager said, “If you don’t mind if I ask … after you left, we checked your accounts and found out that you are a millionaire. Why would you need to borrow $4000?”

The man smiled and said to the manager, “Well, where can I park my car in Sydney City for three weeks for $11.”

An Old Man Walked Into The Bank. 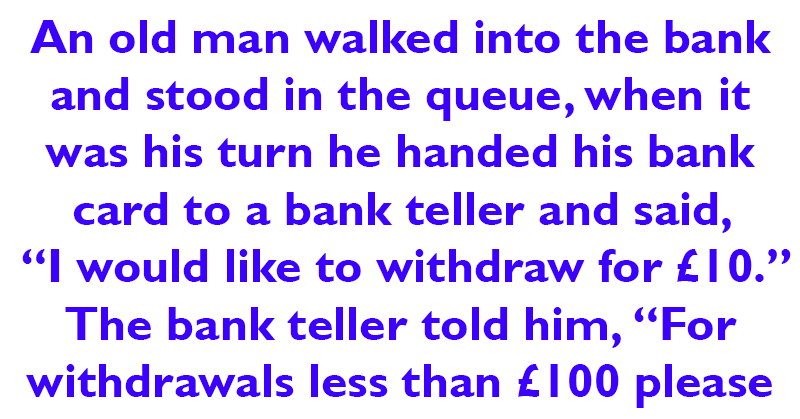 An old man went to a bank to withdraw money.

The old man gave his bank card to a bank teller and said, “I want to withdraw £10.”

The bank teller told him, “For withdrawals less than £100, please use the ATM.”

The elderly man then asked, “Why?”

The teller irritably told him, “These are rules. Please leave if there is no other matter. There is a queue behind you.” She then returned the card to the old man. The elderly man remained silent.

But he returned the card to the bank teller and said, “Please help me withdraw all my money.”

The teller was amazed when she checked the account balance. She nodded her head, leaned down, and said to the old man, “I’m sorry, sir, you have £80,000 in your account and our bank doesn’t have much cash currently. Could you make an appointment and come back tomorrow?”

The old man then told the teller that he wanted to withdraw £5000 from his account.

The teller did so quickly and handed it to the old man respectfully. The elderly man put £10 in his bag and asked the teller to return the remaining £4990 to her account.

Don’t mess with Senior Citizens, they spent a lifetime learning the skills… !!!